We hear much of the decline of our wild flower meadows and the loss of so much of this habitat teaches us to value our native flora wherever we find it. Visiting Shetland in July, the wild flowers were at their best; road verges bursting with Birdsfoot Trefoil, Vetch and Red Clover, burns edged with yellow Flag Iris and damp meadows clothed in sheets of Ragged-robin.

Shetland’s remote location, harsh coastal climate with salt-laden winds and intensive grazing by sheep all contribute to a less diverse wild flower species range when compared to the British Isles as a whole. On the other hand, the sheer numbers of those that do occur contribute a great deal to the beauty of the islands in the summer months. Some are endemic to Shetland, including the Shetland Mouse-ear, Cerastium nigrescens subsp. nigrescens, which grows on the serpentine fellfield at Keen of Hamar in Unst, Shetland’s most northerly island. This unassuming little plant, found nowhere else in the world, has become something of an icon of the Shetland flora. 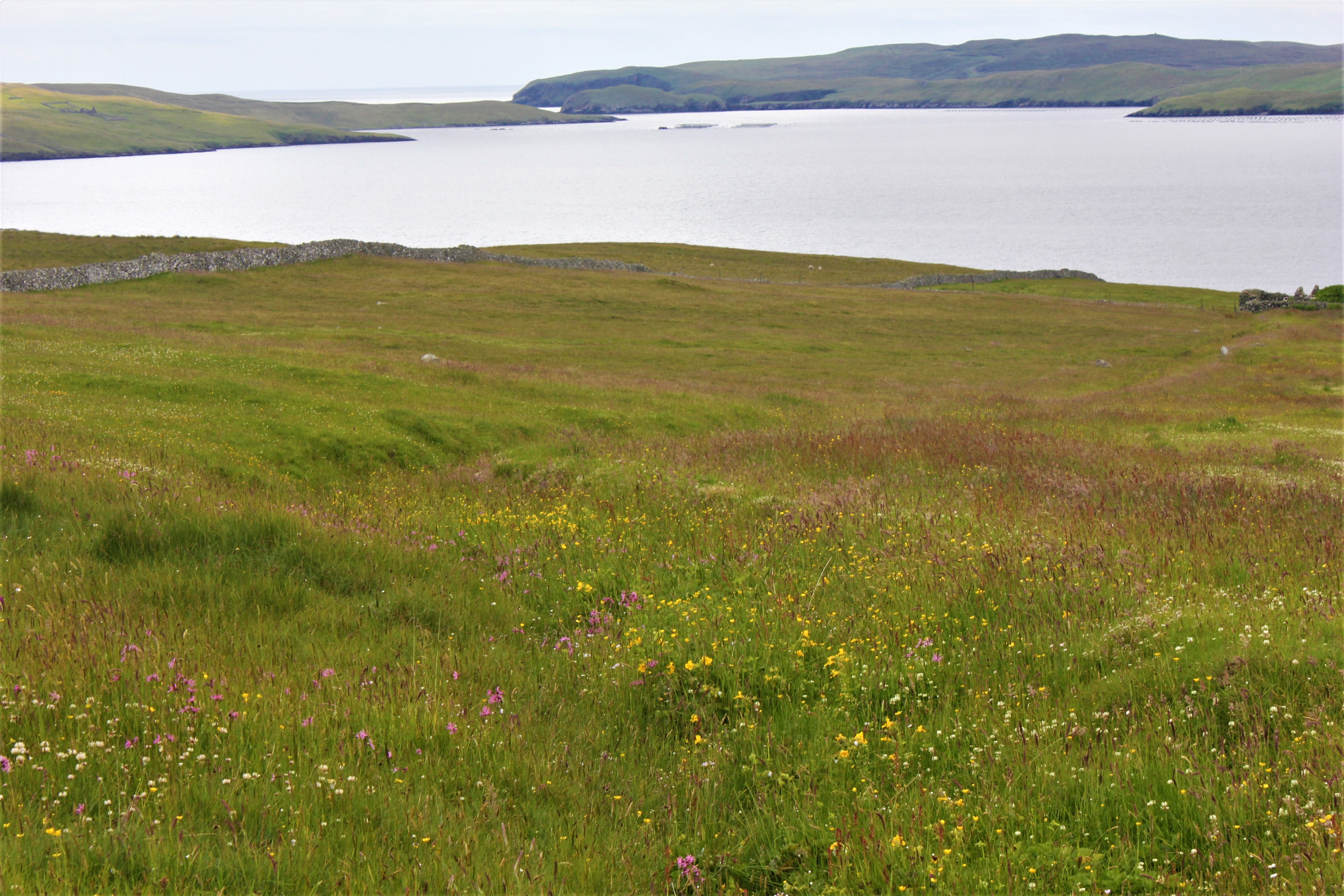 Walking from the shore one day through fields grazed by sheep and Shetland ponies I came to an unstocked field and was struck by the variety of species of wild flowers growing there, particularly along the course of a small burn springing from an area of marshy ground, In all, 28 species were found growing in this small, undisturbed habitat (full list at the end of this post). Among them was hawkweed; it is interesting to note that of the 22 species of flowering plants which are endemic to Shetland, 18 of them are hawkweeds. The Wild Flowers of Britain and Northern Europe (Tiger Books International, London, 1987) describes the hawkweeds as ‘an exceptionally variable and difficult group, with some hundreds of microspecies’. The specimens I found had a basal rosette of untoothed leaves. In spite of much poring over wild flower guides I’m unable to give a definite identification. 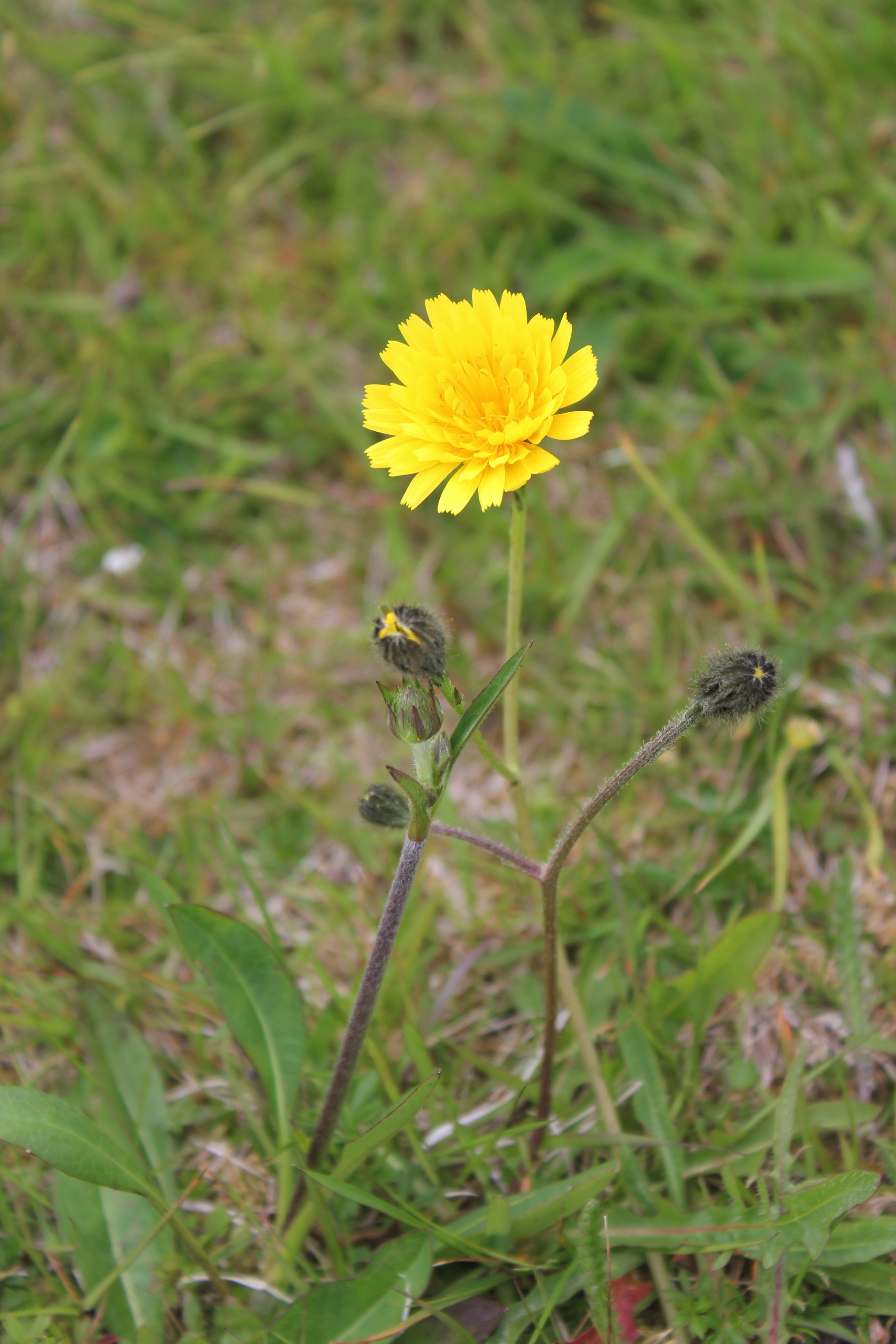 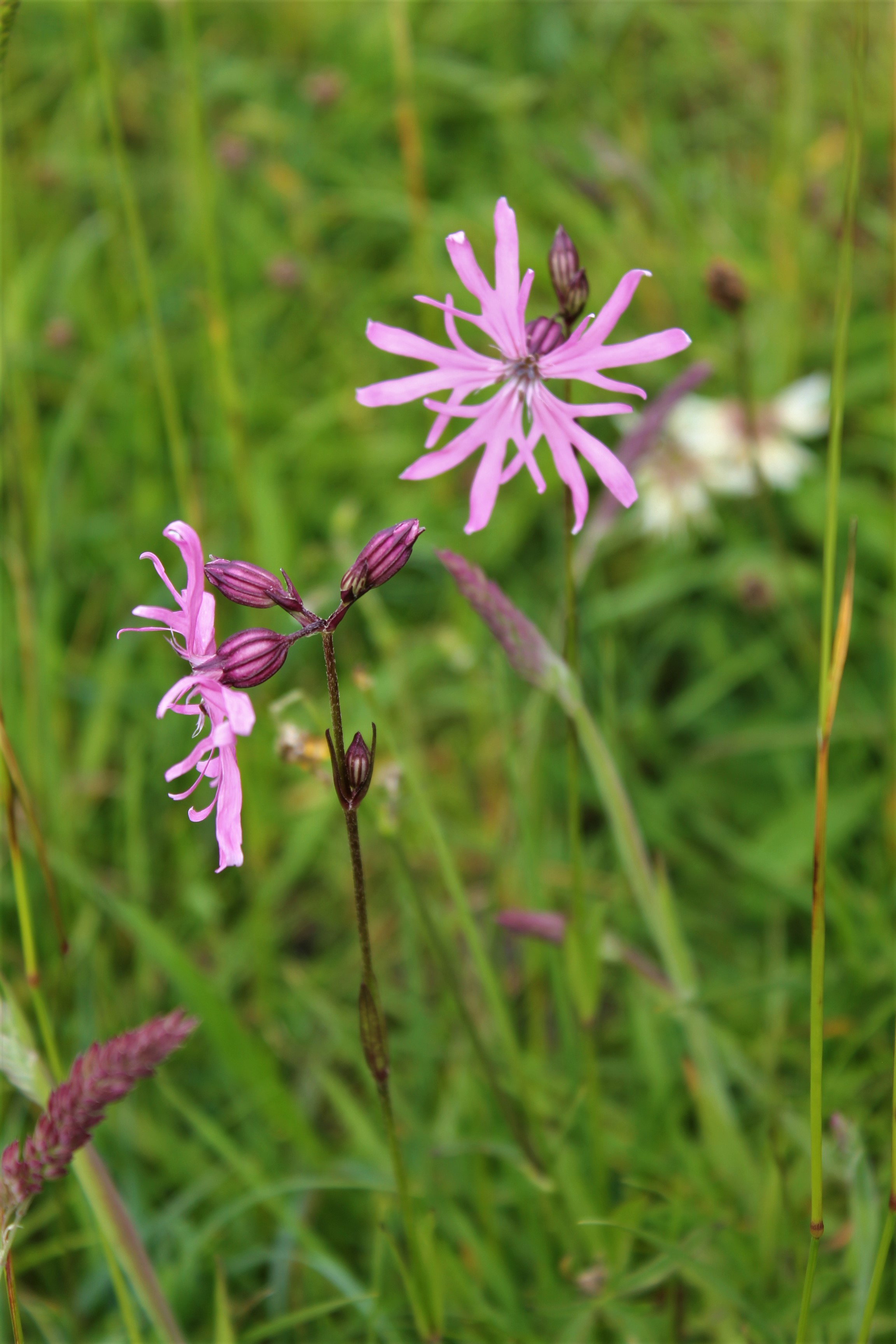 The dampest areas supported Ragged-robin, Grass-of-Parnassus, Eyebright, Creeping Forgetmenot, Lady’s Smock, Common Butterwort and Round-leaved Sundew. The latter two, typically found growing on bog moss, compensate for the lack of nutrients in their environment by being carnivorous. The butterwort traps small insects on its rosette of sticky leaves while the leaves of the sundew are edged with hairs bearing globules of sticky ‘dew’ which trap the insects then fold inward to deposit them on the leaf where they are ingested. 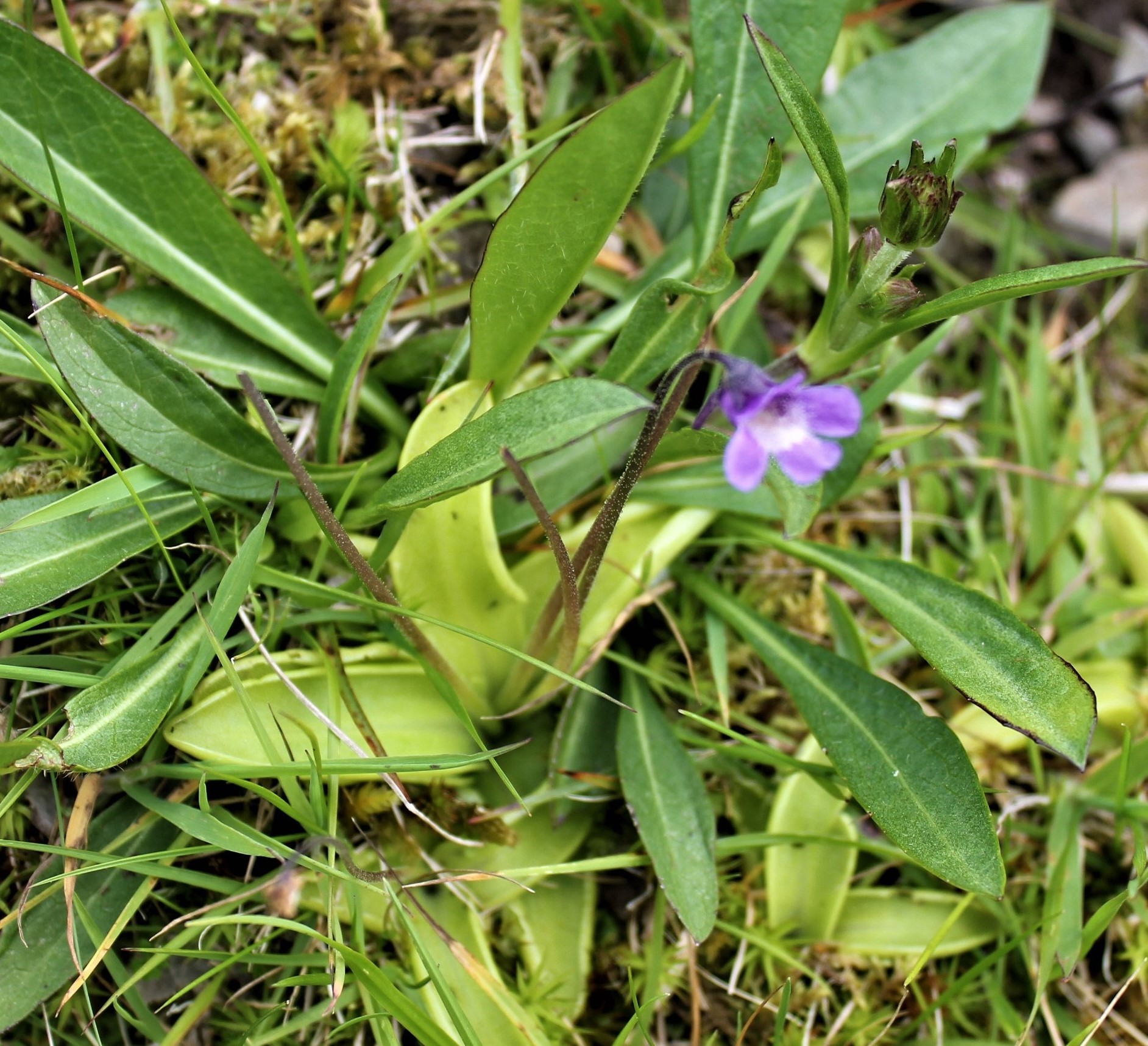 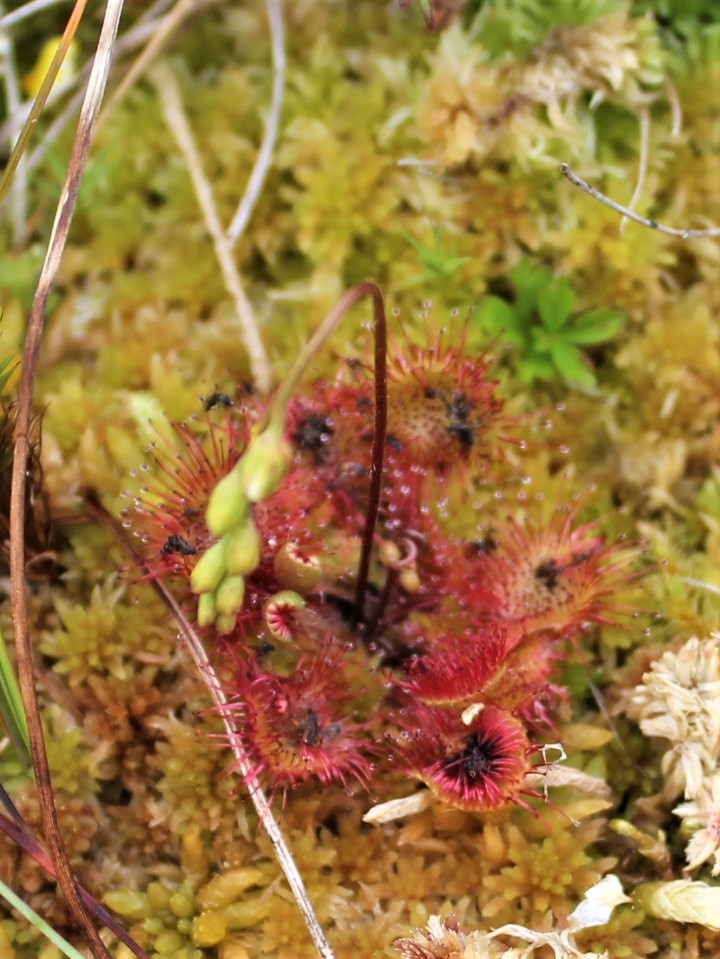 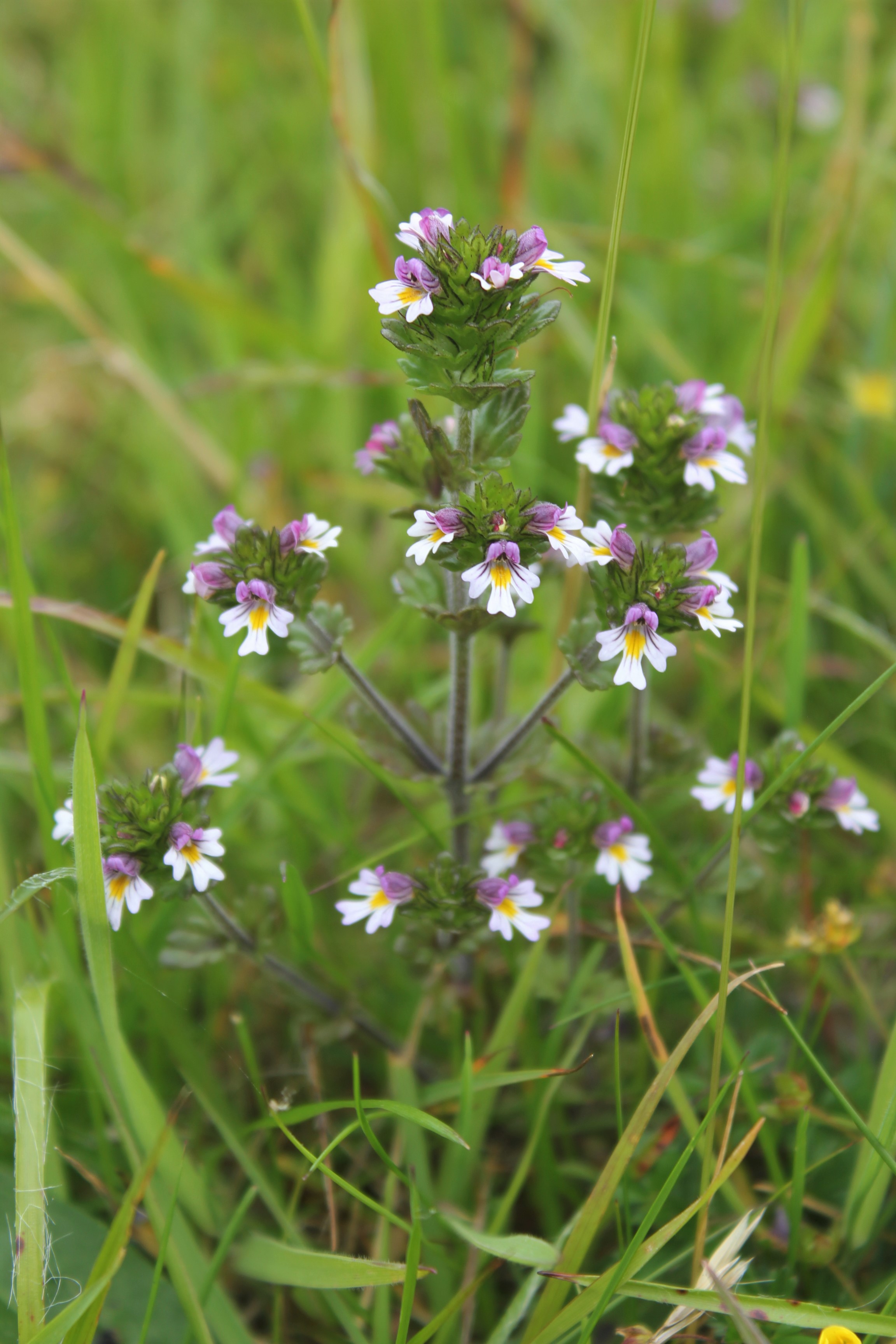 The Eyebright I found growing here is tall and branched with many flowers, unlike the lower growing specimens commonly found in the wider area, suggesting that it is a different species, possibly Euphrasia nemerosa. Eyebrights are notoriously difficult to identify with numerous microspecies and the added complication that these hybridise with each other. According to Wild Flowers of Britain and Ireland (A & C Black, London, 2003), each species overlaps so much with at least one or two others that experts demand six specimens before attempting a positive identification – a state of affairs which certainly lets this amateur off the hook. 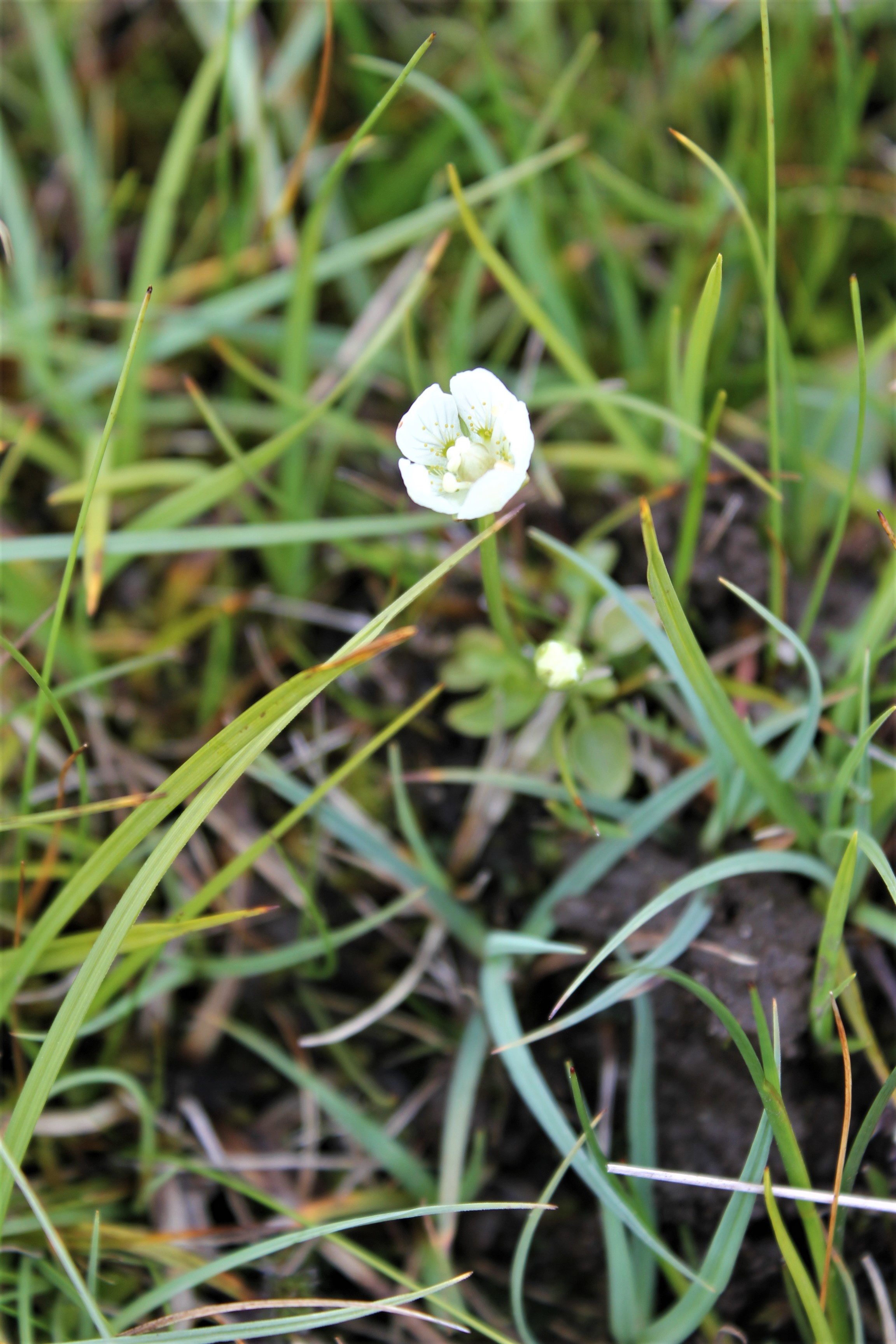 Grass-of-Parnassus, Parnassia palustris is a particularly lovely plant, often found associated with another attractive flower of damp habitats, Bog Asphodel, Narthecium ossifragum. Here, I found both although the latter was still in bud. I later found flowers which had opened in a field not far away and include here a photograph of a specimen from that colony. 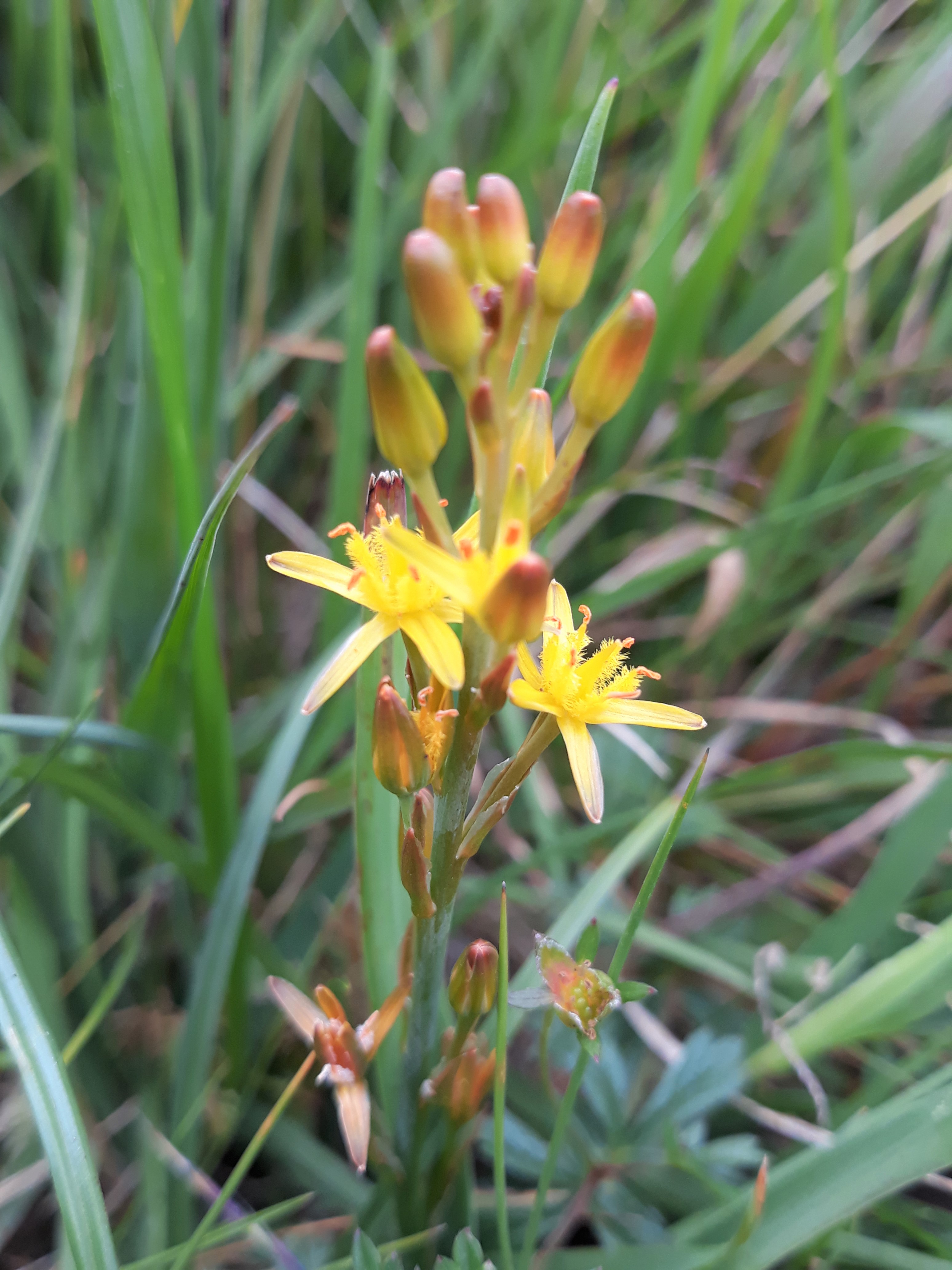 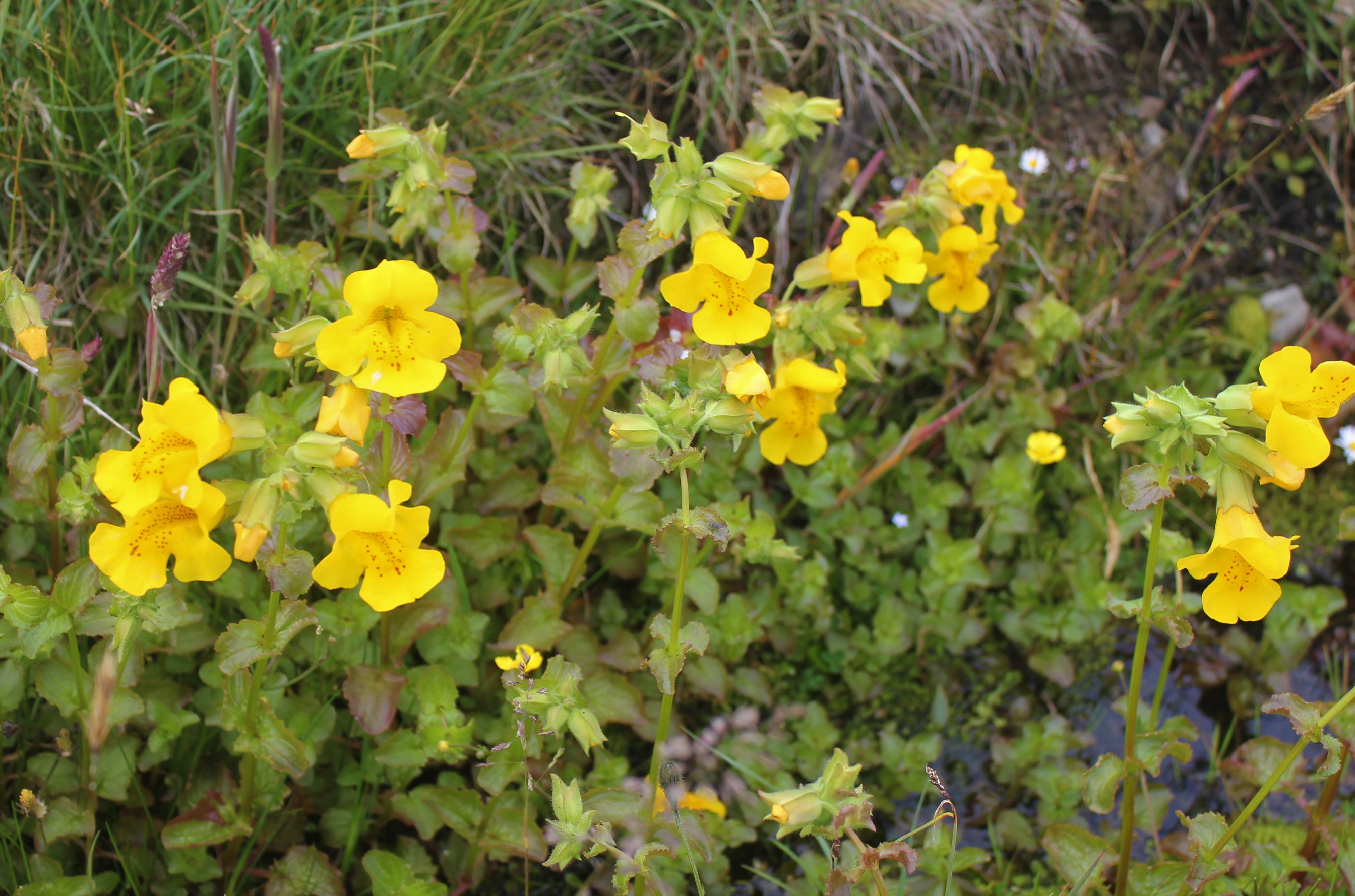 Monkeyflower, Mimulus guttatus, was also present, a species commonly found in Shetland’s burns, frequently in great numbers so that the course of the burn appears as a ribbon of yellow. The plant is thought to have been introduced from Alaska about 200 years ago. Recently, a team from the University of Stirling’s department of biological and environmental sciences discovered a colony growing at Quarff in the south mainland which exhibited larger, more open flowers than normal. Investigation revealed that these specimens had doubled the number of their chromosomes, a process known as genome duplication or polyploidy. While genome duplication is a common phenomenon in the history of flowering plants – many crops such as potatoes, tobacco and coffee are polyploids – duplication typically takes place far back in evolutionary history. Yet in the case of the Quarff monkeyflower this process had occurred in less than 200 years, a very short time indeed on the evolutionary timescale. (Dr Vallejo-Marin, ‘Recent autopolyploidisation in a wild population of Mimulus guttatus (phrymaceae)’, Botanical Journal of the Linnean Society).

Another plant which favours damp habitats is the orchid, one of the loveliest flowers of the summer season and fortunately still very common in Shetland. The area supports a little colony of Northern Marsh Orchid, Dactylorhiza purpurella, with rich purple flowers as well as its paler cousin, the Heath Spotted Orchid, Dactylorhiza maculata. 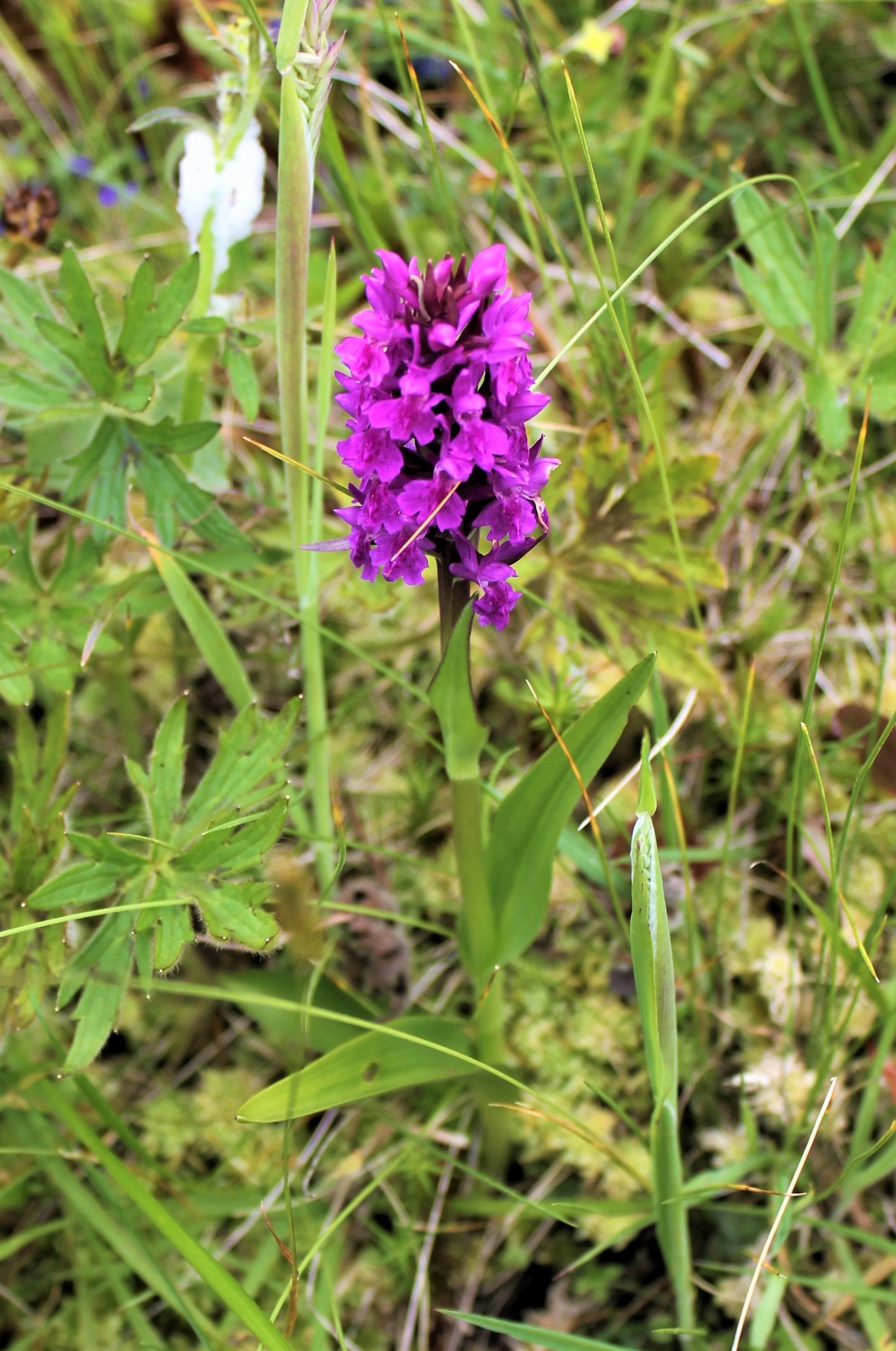 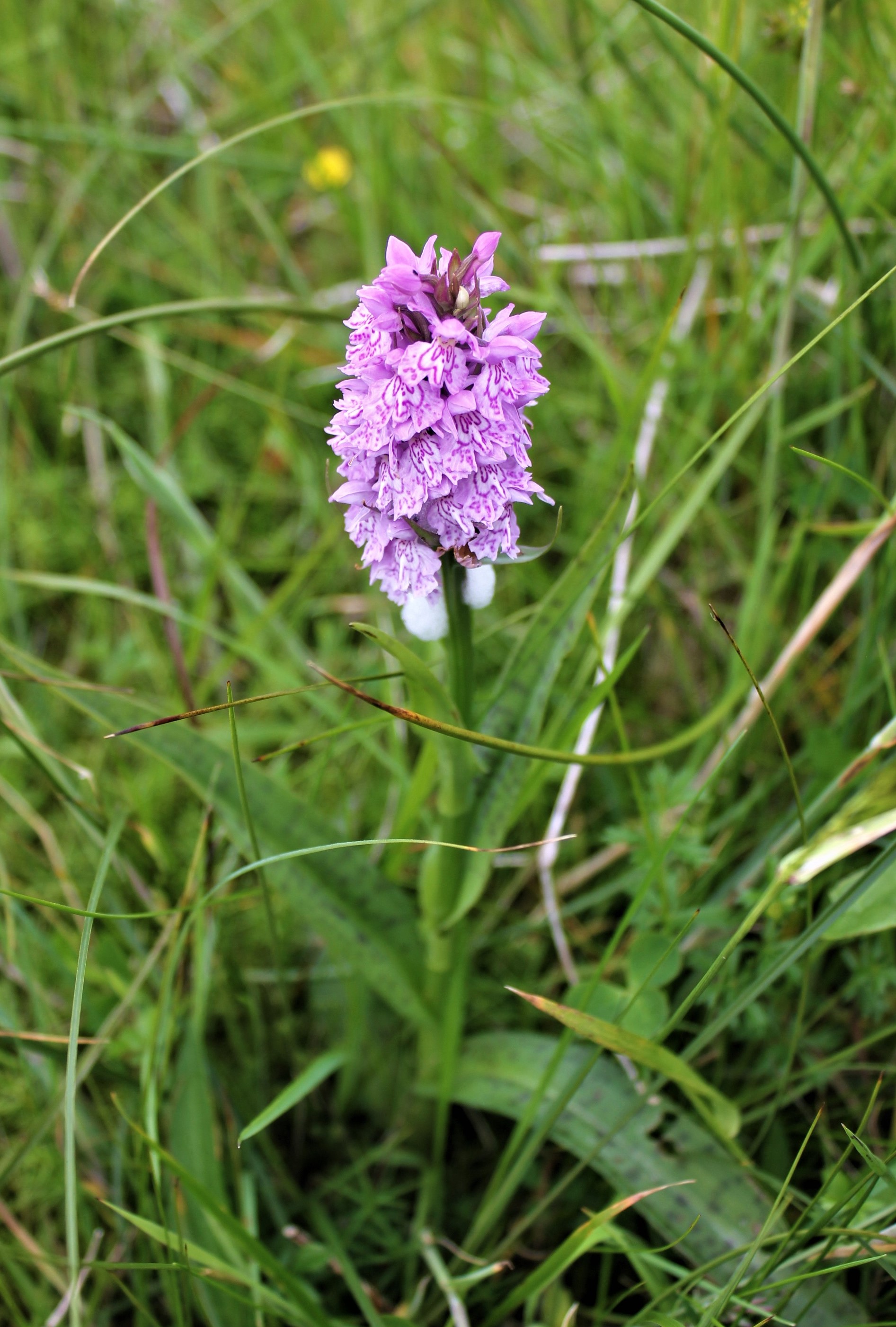 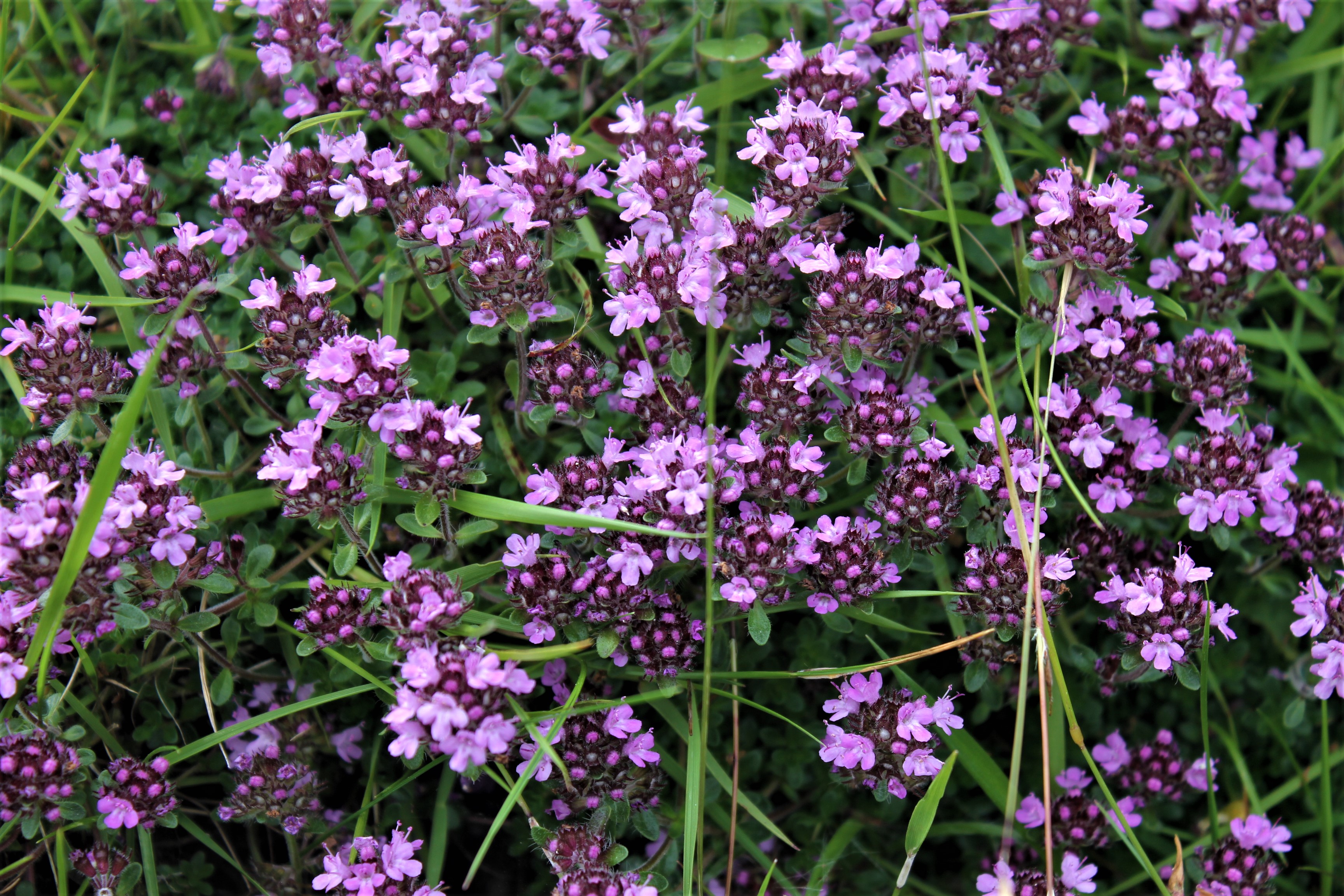 Among other plants found growing here were Wild Thyme, Thymus praecox and two plants which are extremely common in Shetland, Common Milkwort, Polygala vulgaris and Tormentil, Potentilla erecta. Constant grazing keeps them low-growing, flowering at ground level. Common Milkwort occurs in the commoner blue and pink but also in white and lilac. Interestingly, in this habitat where sheep were absent, the Tormentil was a much taller and bushier plant. 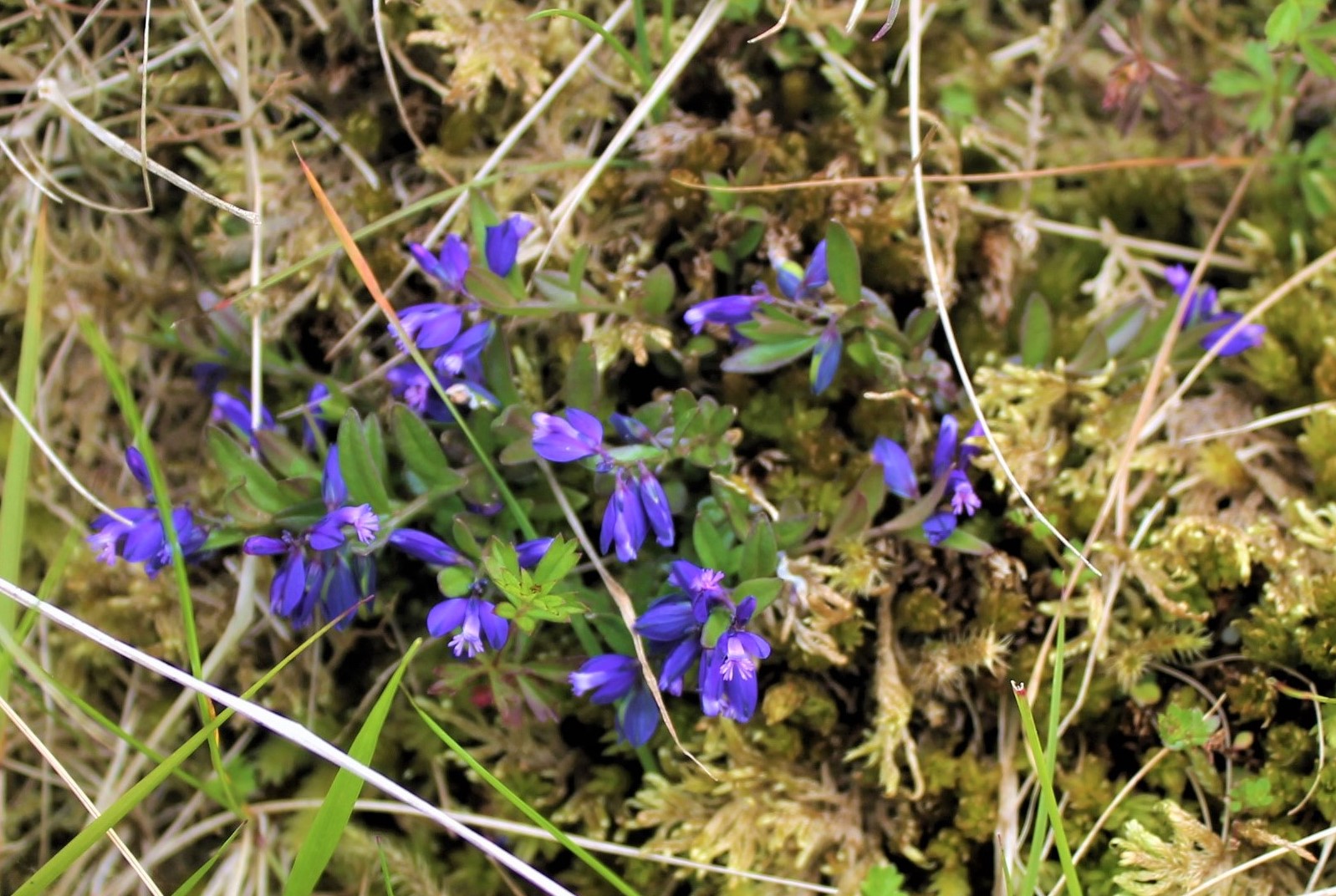 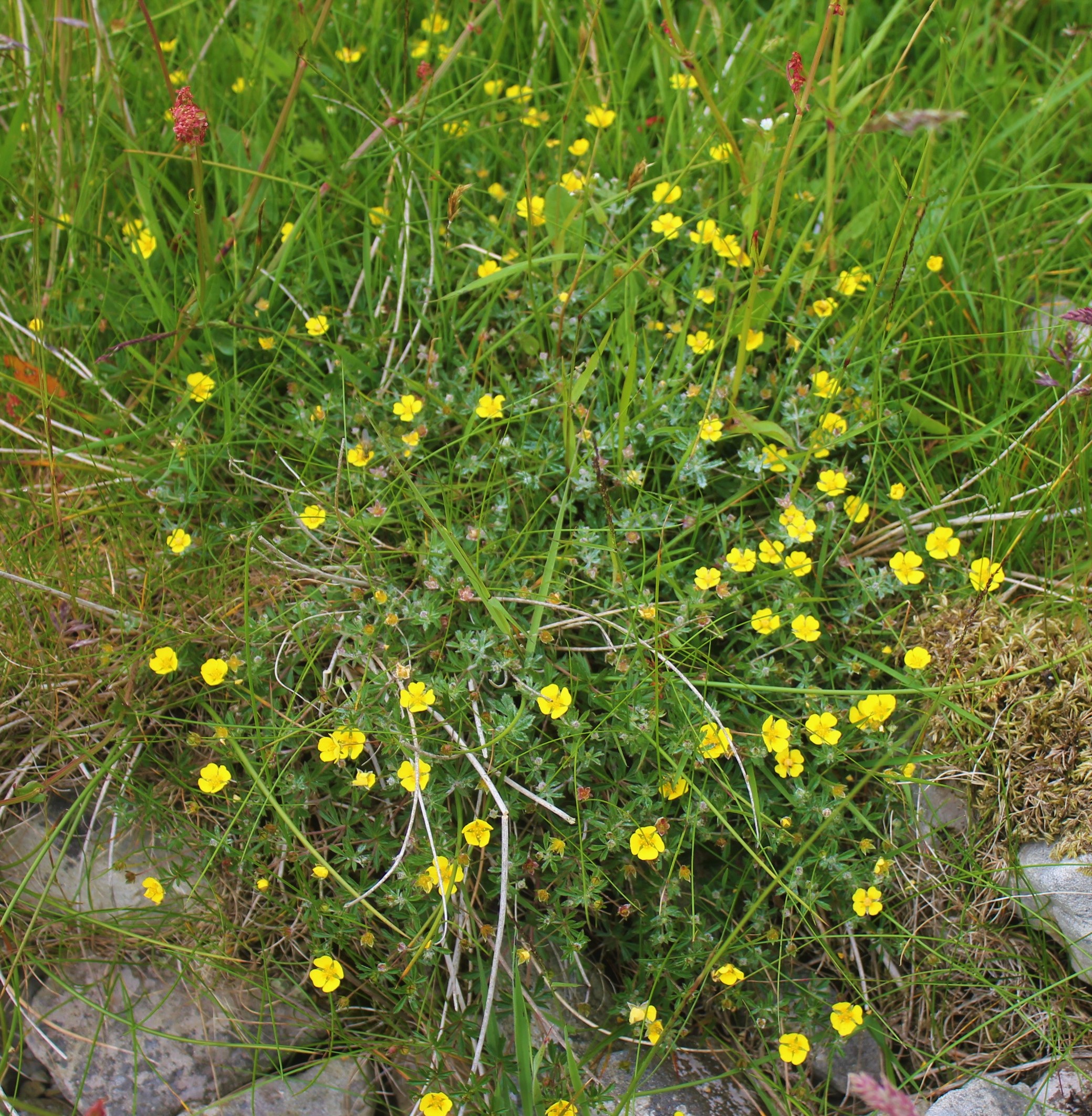 This snapshot of the flora found in one small area is a typical selection of the wild flowers found throughout Shetland which contribute to the character of the islands and give so much pleasure to locals and visitors alike.

We hear much of the decline of our wild flower meadows and the loss of so much of this habitat teaches us to value our native flora wherever we find it. Visiting Shetland in July, the wild flowers were at their best; road verges bursting with Birdsfoot Trefoil, Vetch and Red Clover, burns edged with...

A misty Monday morning in Edinburgh, wistfully wondering where our spring has gotten to! Designed this little bird pin in tribute to the late, great Spike Milligan: ‘Spring is sprung, the grass is ris – I wonder where dem birdies is?’ Sterling silver pin and ring with a Karen hill tribe silver bird.

A Dram from the Heart

Here’s one for all you whisky lovers. This pendant jewellery card is part of an order for Kilchoman Distillery. Based at Rockside Farm on the west coast of the beautiful Isle of Islay, it’s one of the smallest distilleries in Scotland. Here they grow their own barley for floor maltings, one of only a handful...

Our range of jewellery is constantly evolving, to stay up to date with our latest news, make sure you sign up for our newsletter.